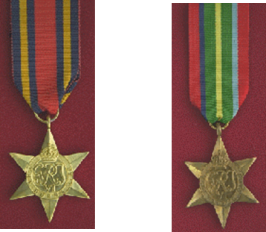 The Burma Star (left) and the Pacific Star with Burma Clasp (right) were alternative awards given during the Far Eastern campaign. Personnel who by their service qualified for both stars were awarded only the campaign star for which they first qualified: they were however, given a clasp to show their entitlement to the second award.

The Burma Star was awarded for one day or more of operational service during the Burma Campaign between the 11th December 1941 and the 2nd September 1945.

The Pacific Star medal ribbon has a yellow centre bounded by green each side representing the forests and beaches of the Pacific.  To the left and right of the green are sky (Royal Air Force) and navy blue (Royal Navy & Merchant Navy) lines and the edges of the ribbon are in red (Army).

The basic medals issued to soldiers who served in Burma were the Burma Star, the 1939-45 Star, the Defence Medal and the Victory Medal.

When you go home

tell them of us and say,

we gave our today